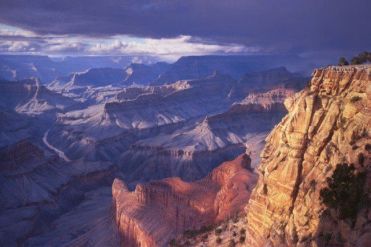 Friday, June 8, marks the 34th annual Prix de West invitational, and will embrace more than 100 artists, including every past winner, so Curt Walters, of Sedona, Arizona, is going to have to be in top form. Preparing for his 10th year with the exhibition at the National Cowboy and Western Heritage Museum in Oklahoma City, Walters has prepared what proves to be the largest piece of the show, a 60” x 90” Grand Canyon interpretation titled “Ra’s Domain.”

This substantial showpiece “embodies some of my favorite canyon themes,” Walters says. “The challenge of such a large canvas is to examine that which I love and fear. Here, great earthen temples named for the Egyptian Gods speak to us of eternity. We see the Tower of Ra keeping watch over a land of extremes: sun versus shadow; reason versus imagination; simplicity versus complexity; and, yes, even love versus fear. Grand Canyon perfectly embodies these disparate factions that compose everyday life.”

The artist’s repertoire for this year includes a second Grand Canyon, “Spring’s Caprice,” 36” x 36”, and two pieces from his trip to Banff and Yoho National Parks in Canada last year. The 10” x 12” “Bow Lake” captures Bow Glacier, headwaters for the Bow River, and “Afternoon at Lake O’Hara,” 12” x 12”, is one of three works at this year’s show to feature the quiet Canadian lake. The other two are by friend and fellow hiker John Moyers, who actually introduced Walters to the secluded location. 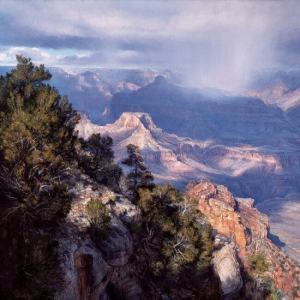 Curt Walters has won a remarkable four medals from Prix de West over his past nine years, more than any other artist in the museum’s history. Awarded the Nona Jean Hulsey Buyers’ Choice Award his very first year, Walters was again honored with the same award in 2002. Then, in 2004 and 2005, the artist was bestowed with an unprecedented back-to-back win of the Frederic Remington Painting Award. Walters has also received Patrons’ Choice Awards from the Masters of the American West expo at the Autry National Center and the Artists of America show in Denver. Last year he was honored with the Best Overall Presentation at the star-studded, first annual Quest for the West show at the Eiteljorg Museum in Indianapolis. He is also featured in the June/July issue of Art Talk.

When Walters is not busy with art shows, he devotes time to his other great passion, conservation of the Grand Canyon and the Colorado Plateau. Through personal donations of profits and paintings, and time devoted to fund-raising events and special seminars, Walters has raised hundreds of thousands of dollars for the Grand Canyon Trust and the Grand Canyon Foundation, where he sits on the board of directors.

Walters has been represented by the Trailside Galleries of Scottsdale, AZ, and Jackson, WY for more than 25 years. His work can also be found at the Claggett/Rey Gallery in Vail, Co.