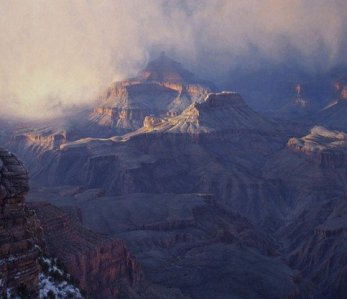 Curt Walters, the most distinguished landscape artist of our time, is gearing up for the first major Western Art show of the year, the 12th annual Masters of the American West Fine Art Exhibition and Sale.  Walters will be on hand at the Autry National Center in Los Angeles for the opening weekend events, beginning on Saturday, February 7, 2009, at 10:00am.

The artist first showed at the Masters show in 1999, when he was thrilled to receive the Patrons’ Choice Award.  At last year’s show, Walters was honored with the Trustee Purchase Award.  The winning piece, “Splendid Turmoil,” is now a part of the Museum’s permanent collection.

Walters will showcase four pieces this year, including a massive 50″ x 80″ oil-on-canvas, “Bright Angel Point.”  One of his signature Grand Canyon pieces, this work was stirred to life by a weeklong painting hike at the North Rim of Grand Canyon.  In a rare move, the artist decided to include the field study of the same piece among his submissions.

For more than a decade, Walters has been an integral part of Western Art’s Big 3 shows, Masters of the American West, Prix de West in Oklahoma City, and the Quest for the West show in Indianapolis.  In that time, he has won the Prix de West Purchase Award, an unprecedented double-win of the Frederic Remington Award in 2004 and 2005, six Patrons’/Buyers’ Choice Awards, the Victor Higgins Work of Distinction Award, and the Artist of Distinction Award, among others.  The Artist of Distinction Award is celebrated with a special 90-day, one man show to be held at the Eitlejorg Museum in Indianapolis this September.

For more information about the Masters of the American West show or the Autry Museum, go to http://www.autrynationalcenter.org.