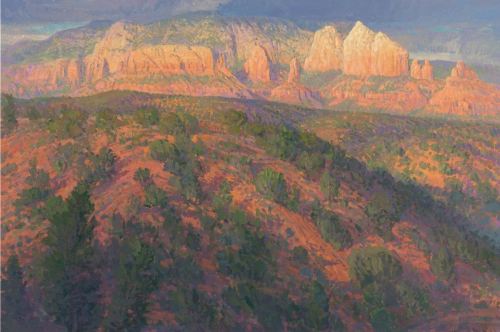 For the most part, all of my plein air paintings until the 1980’s were smaller in size. As I became more aware of my own skills and instinctively realized my brain would not learn new skills if not forced into new thinking, I decided that the only way for me to truly learn the craft of painting was to paint large canvases outdoors. With persistence and practice, my eye and hand began to merge. After this painting was completed on location in 1986, for reasons now forgotten, I decided it needed a change. With some glazing and a different sky, it became a late evening image. If left alone in the studio for too long, all my paintings become subject to change. The great painter George Inness was notorious for making changes in his paintings even after they were sold; I too have been guilty on occasion. Please take a moment to compare this Sedona painting to First Touch of Winter a painting from near the same viewpoint, created thirty years later.