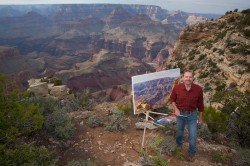 The activities will begin on April 11th with Curt presenting a three-day, hands-on, plein air painting class. This event is sold out due to extreme popularity.

Curt will follow his sold out class with a lecture at 10:30 on April 15th where he will discuss his passion for the Grand Canyon and his active role in its conservation. Sharing a story through his artwork, attendants will learn the history of Curt’s travels and his documentation of one of America’s most treasured assets. The official show and sale will begin at 6:00pm the same night and will run through July 10, 2011.

Fans and collectors will have the opportunity to meet and mingle with both artists on Saturday the 16th, at the Meet the Artists Brunch. Brunch is $19.95 per-person and R.S.V.P. is required. To attend the brunch, please contact the Gilcrease Museum at (918) 596-2720.

Curt will unveil 22 new works which will all be available for purchase during the run of the show. “Winter’s Levity” and “Mercurial Sun of January” both offer breathtaking views of the South Rim. Even though Walters is best known for his massive imagery of the Grand Canyon, he is including a beautiful view of Yellowstone appropriately named “Sun Up on the Yellowstone.”

A number of new works which he painted while on location in Spain and France in the fall of 2010 include “Puente Nuevo – Rhonda Spain” and “Door of Forgiveness.” These are just two of the small masterpieces which will be available at the Gilcrease.

The second half of the show is a retrospective look at the evolution of not only Curt’s work, but that of the landscapes he frequents. Several works of the Canadian Rockies, including his award winning work entitled “September at Lake O’Hara,” will be in the retrospective portion of the show.

Named “One of Eight TRUE Masters” by Art of the West in 2007, Walters has won a staggering array of awards from some of Western Art’s most prestigious shows. In just a decade, Walters’ has taken home the highly coveted Prix de West Award, the Trustees’ Purchase Award from Masters of the American West, and the Artist of Distinction Award at Quest for the West, in addition to six Patrons’ Choice Awards from these and other shows.

His work is found in museums and public and private collections throughout the world, including the abovementioned museums, the Forbes Magazine Galleries, the Leanin’ Tree Museum, the Pearce Museum in Corsicana, TX, and at the Grand Canyon National Park. His collectors include Kareem Abdul-Jabbar, Frank and Kathy Lee Gifford, astronaut Frank Borman, Mikhail Baryshnikov and the estate of Robert Urich.

Walters’ paintings are available at the Trailside Galleries of Scottsdale, Arizona, and Jackson, Wyoming, the Claggett/Rey Gallery in Vail, Colorado, and at Nedra Matteucci Galleries of Santa Fe, New Mexico. Curt also has an online gallery where his original and reproduction works are available.

To see the selections which will be available for viewing and for purchase during the Rendezvous show and sale, please visit the 2011 Gilcrease Selections page.