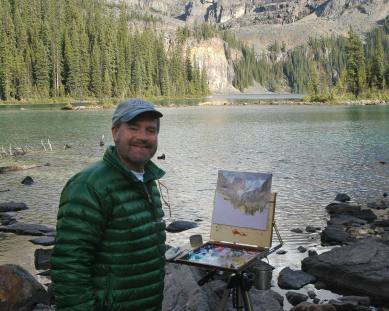 The Story of Leanin’ Tree: Art and Enterprise in the American West chronicles the 60 year course of Leanin’ Tree’s fine art greeting cards. Designed by the celebrated Carol Haralson, the book spotlights a number of Arizona’s most prominent artists, including Curt Walters and James Reynolds of Sedona, as well as the late Frank McCarthy and R. Brownell McGrew.

Featuring hundreds of images from The Leanin’ Tree Museum’s legendary collection, and art commentary by Leanin’ Tree founder Ed Trumble, many of these now classic pieces were collected before Western Art was considered a serious genre.

Of Curt Walters, already known as the “Greatest Living Grand Canyon Artist” and “One of Eight True Masters” of the West, Trumble writes that “Walters is widely recognized as one of America’s foremost landscape painters, especially distinguished for his plein-air paintings.”

Both Trumble and his sons have been longtime admirers of Walters’ work, and the artist’s images grace the halls of the museum as well as the pages of the book. In fact, Walters’ compelling landscapes have appeared on Leanin’ Tree cards for more than 20 years.

One of Walters’ pieces, found twice in the book, is “Cimmerian Whispers,” a large 60” x 80” studio painting that Trumble calls “breathtaking.” Walters’ “Mt. Biddle” is featured in the forward.

Currently, Walters has been busy at the South Rim of Grand Canyon, preparing for the third annual Quest for the West Art Show and Sale at the Eiteljorg Museum in Indianapolis, Indiana, starting on the 8th of September. He’s invigorated and fresh, ready for the big show. Reinspired by art and enterprise in the American West.

Curt Walters has appeared in a number of other special art volumes, including Majesty of the Grand Canyon, Leading the West, A Window on Sedona, and Art of the Golden West. His work is available at The Trailside Galleries of Scottsdale, Arizona, and Jackson, Wyoming, and Claggettt Reproductions, prints and giclees, as well as original artwork, can also be found at www.curtwalters.com. The Leanin’ Tree Museum of Western Art is located in Boulder, Colorado. The Leanin’ Tree website is www.leanintree.com.