The Lifetime Achievement Award Goes To …

More than 200 guests attended the special evening. Nearly half were from out of town, with fans travelling from as far away as Montana, Michigan, and even Ohio. At points during the night, space was limited to standing room only.

The evening started with cocktails in the Aqua Fria Gallery, where Curt’s “Sun Shadow Wind” hangs as part of the permanent collection. The evening event moved to the Cultural & Learning Center where a slideshow presentation featuring a retrospective of Curt’s work, career achievements and his journey through the western art world was show.

Guests were then treated to a formal dinner, the award ceremony, and an auction. Curt’s donated painting, “Momentary Flare,” a 12” x 10” oil, created specifically for this event and donated by Curt, sold at double the gallery price, raising $9500 for the museum.

Dr. James Burns, Executive Director of DCWM, presided over the award ceremony. Chief Curator of the Phoenix Art Museum, Jim Ballinger, was quoted as saying Curt talents and his work are “smoking hot.”

After obtaining many awards over the span of his career, Curt graciously accepted his award surrounded by many collectors, fans and friends. Some of the awards Curt has secured over the course of his career include 5 various awards from the Eiteljorg Museum including 2 Artist of Distinction Awards; The Trustee’s Purchase and Patron’s Choice Awards from the Autry Museum in Los Angeles; 5 Nona Jean Hulsey Buyer’s Choice Awards, 3 Frederic Remington Awards and the coveted Purchase Award from the Prix de West Invitational. In 2010, Curt was honored with The Rendezvous Artists’ Retrospective Exhibition at the Gilcrease Museum in Tulsa. The list continues and can be seen in detail, along with other honors and moments from Curt’s career on this page. 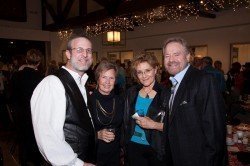