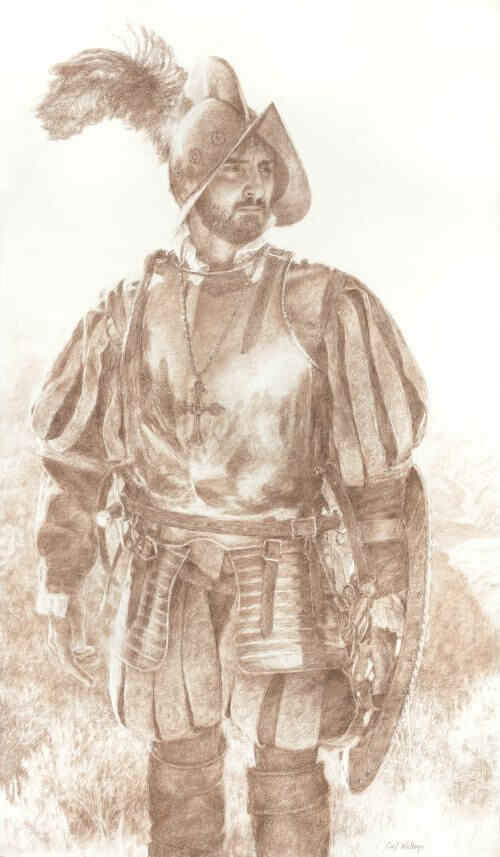 Conté Drawing on Panel Board

I am fascinated by the stories of Francisco Vázquez de Coronado and the Spanish Expeditions through the Southwest 467 years ago, the results of which  shaped  political and economic events that are still felt  today. The part of the story that intrigues me the most is the discovery of Grand Canyon in August of 1540, led by Don Garcia Lopez de Cardenas, a captain in Coronado’s army. Guided by the Hopi to the edge of Grand Canyon by the Hopi was an amazing ethnographic mix of cultures and personalities, upper class Spaniards known as hidalgos, European soldiers from several regions, many African slaves, Moors, and Mexican Indians.  For several years now I have been researching this discovery event, trying to uncover facts and more about the men involved. I have spent a great deal of time locating and purchasing historical costumes, replicas and artifacts specific to the time period. “Garcia Lopez de Cardenas: September 1540” is one of many studies I am doing on the subject.

In 1539, Friar Marcos de Niza, a Franciscan priest, reported to Spanish colonial officials in Mexico City that he had seen the legendary city of Cibola. Viceroy Mendoza, on January 6, 1540, appointed Francisco Vázquez de Coronado to lead an expedition to conquer the area.

In February 1540, Coronado’s route, began in what is now Puerto Vallarta on the west coast of Mexico, heading north through the Sinaloa and Sonora deserts, and headed north on trails that parallels today’s border of Arizona and New Mexico. It was a medieval-looking army of 350 European men-at-arms, a large number of spouses, African slaves, and servants, and as many as 2,000 Mexican Indian allies, mostly warriors from Aztec, Tarascan, and other tribes from central and western Mexico, 540 saddle horses for the caballeros, 960 pack horses and mules, and cattle, sheep and pigs for the expedition commissary.

On July 7, 1540, Coronado’s large military expedition made its way to the villages of the Cibola (the present day Zuni Reservation of west central New Mexico) where a major battle occurred between the Zunis and the Spaniards in which Coronado narrowly escaped death. It is likely that the horses and sheep with Coronado were the first the Zunis had ever seen.

While remaining at Cibola, General Coronado appointed García López de Cárdenas to lead a force to the Grand Canyon of the Colorado River. In September, 1540 Captain Cardenas along with Hopi guides and a small group of Spanish soldiers, and servants (number unknown) traveled to the South Rim of the Grand Canyon between present-day Desert View and Grandview Point.

It is the first moments of being confronted by the massive chasm that I have chosen to draw in “Garcia Lopez de Cardenas: September 1540”.  In my research I have found that Lopez de Cardenas was first cousin to Coronado and distant cousin of Carlos V King of Spain, so there is a clue to his physical appearance. I discovered my model three years ago, a friend of my grandson. Ty Brand is a very handsome young man from the Cottonwood, AZ area. Immediately upon meeting him, he made me think of Lopez de Cardenas. His dark piercing eyes and facial features are perfect as the face of Cardenas. In my portrait of Lopez de Cardenas, he looks into the distance as he stands at the edge of Grand Canyon, behind him is the Colorado River.

Cardenas ordered Pablo de Melgrossa, Juan Galeras, and a third, unnamed soldier to descend into the Canyon and report back about the river below.  After descended some 1/3 of the way they were forced to return because of lack of water. In their report, they noted that some of the rocks in the Canyon were “bigger than the great tower of Seville.”  Without water, the Cardenas detachment remained only three days on the Canyon rim.

Leaving Zuni, Coronado moved his main army in the last weeks of 1540. He passed the famous mesa-top pueblo of Acoma, and east to the province of Tiguex, the area along the Rio Grande. The Indians were at first friendly, but the conduct of the Spaniards soon provoked hostility and resistance, which was put down with one thirty to one hundred surrendered prisoners being burnt at the stake, or shot as they attempted to escape. This was a dishonorable violation of the promise of mercy which to this day has not been forgotten. Coronado remained in Tiguex for about 80 days.

As winter lifted in 1541, Coronado traveled 150 miles east of Tiguex to Pecos Pueblo.

Falsely guided by an Indian named the Turk, they left Pecos and traveled eastward across east-central New Mexico until they reached extremely flat plains of the Texas panhandle and witnessed the massive herds of buffalo.  So devoid of features was this grass plain that some men who set out from army camps to hunt couldn’t find their way back and were lost. Cardenas was badly injured and broke an arm.  Finally, they found two canyons, present-day Palo Duro and Tule canyons, where they camped. In 2014, archeologists working at this site discovered the breast plate armor of Garcia Lopez de Cardenas himself, with his name inscribed. Coronado held a council of his captains in which it was determined that the army should return to Tiguex while Coronado took a force of thirty men to the north in search of Quivira.

During this march, the Spaniards traversed what is now the Oklahoma Panhandle and Kansas.  July 29, 1541, Coronado and his army arrived at the “river below Quivira” (probably the Arkansas). Lack of men and no promise of finding reward Coronado was forced to join his men at Tiguex. A bad fall from a horse and head injury befell Coronado, and he and his captains wish not for another winter without food and clothing. Disheartened they headed home.  The travelers trudged southward, retracing their route home. Some missionaries chose to stay behind.

Many cruelties had been imposed on the native peoples, yet without the food and clothing supplied by them the army of Coronado would not have survived.

Because no wealth had been found, the expedition was considered a total failure. The expedition did, however, very accurately map the land and rivers of the Southwest and paved the way for a succession of miners and missionaries over the next three centuries.  On his return home to Spain, Cardenas was sentenced to seven years in prison for his crimes against the Indians of the Arenal Pueblo.