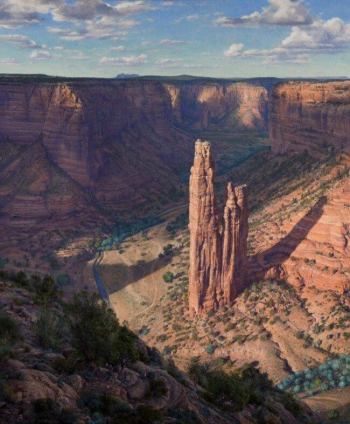 Master Artist Curt Walters will join 74 of his peers at the Masters of the American West Fine Art Exhibition and Sale at the Autry National Center in Los Angeles on Saturday, February 6, 2010. The Sedona, Arizona-based painter will lead off the schedule of events with a special First Presentation, “Place and Moment,” detailing the history behind some of his greatest works, including his acclaimed Grand Canyon pieces.

Walters, known as the “Greatest Living Grand Canyon Artist,” will display five paintings, the centerpiece being “Return to Spider Rock,” a 60″ x 50″ oil on canvas depicting the 800-foot monolith found at Canyon de Chelly in northwest Arizona Navajo Reservation. He captures his favorite subject with his other four entries, including the 28″ x 28″ “New Day Encounter” and a 6″ x 8″ piece for the Masters Miniatures wall.

Masters is one of the “Big 3” Western Art invitationals, all of which Walters participates in. He collected a Patrons’ Choice Award his first year at the Autry, and in 2008, his “Splendid Turmoil” won the Trustees’ Purchase Award. He’s taken home a staggering six medals from Prix de West at the National Cowboy Museum in Oklahoma, including the Prix de West Purchase Award and 3 Buyers’ Choice Awards. The Quest for the West expo has treated him equally well, awarding him four medals since its inception and a special one-man retrospective in 2009, featuring dozens of his works borrowed from museums and collectors from around the world.

In addition to the Autry, Walters’ pieces can be found in the National Cowboy and Western Heritage Museum in Oklahoma City, The Eiteljorg Museum of American Indians and Western Art, The Forbes Magazine Galleries, Leanin’ Tree Museum in Boulder, the Pierce Art Museum in San Antonio and at the Grand Canyon National Park. His work is available at at many fine galleries. To view work currently available, go here.

For more information about attending the cocktail reception, sale and special programs, contact the Special Events department for the Autry Museum at 323.667.2000, ext. 317.

To view the Awards and Honors Curt has received over the years, please view his Picasa Photo Albums here.