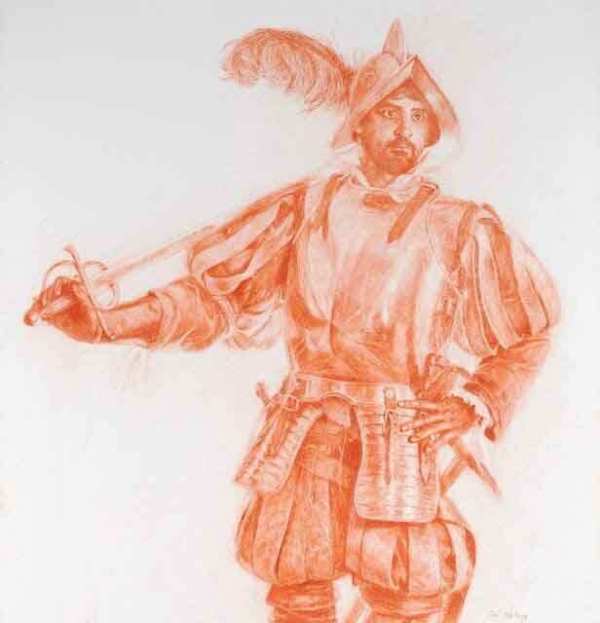 Since I was a kid, growing up in New Mexico, I have been fascinated by the stories of Francisco Vázquez de Coronado and this Spanish expedition  through the Southwest. His massive army conquered land and pueblos, often with cruelty, from Mexico City across Arizona, New Mexico, Texas, Oklahoma and Kansas. The expedition shaped the political and economic events that are still felt today. The part of the story that intrigues me the most is the discovery by a few of these first Europeans to see Grand Canyon.

After the siege of  Cibola (present day Zuni Pueblo in West central New Mexico), General  Coronado  appointed  García López de Cárdenas to lead a force to the Grand Canyon of the Colorado River.  In September, 1540 Captain Cardenas along with Hopi guides and a small group of Spanish soldiers, and servants (number unknown) traveled to the South Rim of the Grand Canyon between present-day Desert View and Moran Point. Cardenas ordered Pablo de Melgrossa, Juan Galeras, and a third, unnamed soldier to descend into the Canyon and report back about the river below.  This is the subject of my drawing “Grand Explorer: Lopez de Cardenas.” After three men descended some 1/3 of the way they were forced to return because of lack of water.  In their report, they noted that some of the rocks in the Canyon were “bigger than the great tower of Seville.” Without water, the Cardenas detachment remained only three days on the Canyon rim.

The Hopi guides were witness to a first-time singular event; an amazing ethnic mix of cultures and personalities, upper class Spaniards known as hidalgos, European soldiers from several regions, many African slaves, and Mexican Indians all seeing the Canyon for the first time-together. For several years now I have been researching this discovery event, trying to uncover facts and learn more about the men involved. I spent a great deal of time locating and purchasing historical costumes, replicas and artifacts specific to the time period.

I know that Lopez de Cardenas was first cousin to Coronado and distant cousin of Carlos V, King of Spain, so there is a clue to his physical appearance. I discovered my model Ty Brand three years ago, a friend of my grandson.  Immediately upon meeting him, he made me think of Lopez de Cardenas. His dark piercing eyes and facial features are perfect as the face of Cardenas. I have given him the stance of a young hidalgo, the class distinction is felt in the clothing and armor and sword held over his shoulder.