Walters, now in his seventeenth year with the show, will display three pieces. Gathos Reawakening, a 48″ x 72″ Oil on Linen Canvas captures the light breaking after an early December storm as it bathes Zoroaster temple complex, as seen from Yaki Point. The name for this grouping of temples derives from ancient Persian mythology. Curt said “The song-like quality of the light and the rhythmic shadow patterns across the temples made me think of the ancient philosophy of Zoroaster, which focused on the spiritual battle between opposing forces, symbolized though the contrast of light and dark.”

The second of the three entries is the nocturne Contradictions. An oil, 20″ x 30″ view from Caesar’s Palace, looking down the strip in Las Vegas. In the distance you can see the Paris casino and lights of the Flamingo. The last piece being entered is Transitions which was painted on location in Monument Valley. This oil on canvas board measures 8″ x 10″.

The artist has become a fan favorite, winning multiple Nona Jean Hulsey Buyers’ Choice awards as well as a three Fredrick Remington Awards.  In 2007, Walters won the Prix de West Purchase Award for his painting, Spring’s Caprice, which now hangs in permanent collection in the museum.

Walters will be in attendance over the weekend of events. The Art Auction and Awards Banquet begins at 7:30pm on Saturday, June 14th. Walters has entered the piece Gambogian Glow, a 28″ x 28″ oil on canvas board, for the live auction which will kick off the evening’s activities. To learn more about the Prix de West Seminar and Events Schedule, please visit this page: http://www.nationalcowboymuseum.org/events/pdw/2014/schedule.aspx 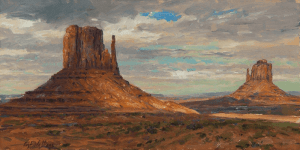 Walters is a multi-award winning artist from many of the nation’s top Western Art shows, including Masters of the American West at the Autry National Center in Los Angeles, Quest for the West at the Eiteljorg Museum in Indianapolis, and the American Masters Show at the renowned Salmagundi Club in New York City. His artwork is collected by museums, foundations, educational institutions and celebrities. His most recent win came from the Desert Caballeros Western Museum, awarding their first Lifetime Achievement Award to Walters in January.

Walters’ paintings can be purchased at Trailside Galleries of Scottsdale, Arizona and Jackson, Wyoming, the Claggett/Rey Gallery of Vail, Colorado, the Nedra Metteucci Galleries of Santa Fe, New Mexico and can be viewed on his website: http://curtwalters.com.