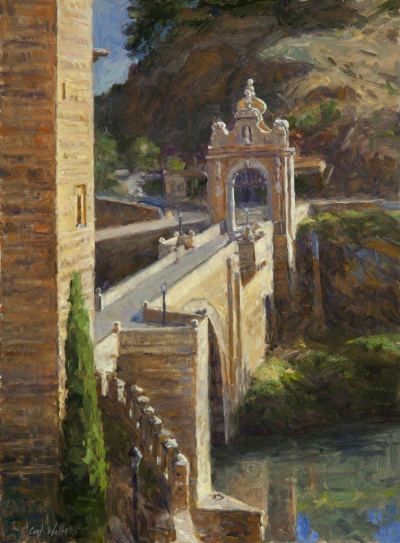 The end of October 2010, I traveled with Tom Dailey and artist friends John and Terri Moyers, to Normandy, France followed by a month in southern Spain.

Toledo is in central Spain, a place of coexistence of Christian, Jewish, and Muslim cultures. The city was declared a World Heritage Site in 1986 for its extensive cultural and monumental heritage as one of the former capitals of the Spanish Empire. For me, it was particularly exciting and challenging to paint the elaborate and ornate architecture of the Alcántara Bridge built over the Tagus River.  It was declared a national monument in 1921. I found a vantage point looking down on the bridge. Built in medieval times, it was one of the main bridges leading into the city and is heavily protected by two fortified gates at each end, one of which is Baroque. It was easy for me to imagine the medieval pilgrim stopping to pay for entry to cross the bridge.

It was great fun to have a dramatic change of pace from my western subject matter. I loved painting the great architecture and centuries old historic sites, and of course visiting the great Spanish art museums. I am convinced that these travel-painting trips keep my work fresh for me and my collectors.