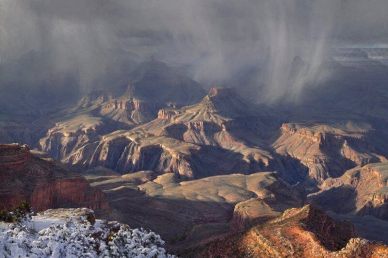 Master Artist Curt Walters, who makes his home in beautiful Sedona, Arizona, is always proud and excited to be a part of the annual Quest for the West art show at the Eiteljorg Museum in Indianapolis, IN.

Returning for his seventh year, Walters will display three paintings during the exhibit, which runs September 7 – October 7th, 2012.

The centerpiece of his work is “Crystal Rain,” a 40″ x 60″ oil on canvas featuring his favorite subject, The Grand Canyon. Of the painting, Walters says:

“I was fortune to be at Grand Canyon in the later part of March when a heavy snow covered the South Rim. It was a magical experience to paint: showers of snow and crystal rain move through the Canyon and engulf the North rim from view. The elegant Temple Isis and Cheops emerge out of the showers while the sun shines bright on the South rim. A thousand feet below, in the Canyon, spring growth of new grasses caress the talus slopes and plateaus and the valley cottonwood trees have turned green.”

A favorite among patrons and critics, Walters has won five awards in the show’s history, including the Artist of Distinction Award in 2008. This prestigious award led to a special one-man show, Moments & Monuments, in 2009, featuring twenty years’ worth of original artwork borrowed from collectors and museums all over the country.

Walters has also won top honors from other distinctive Western Art shows, including the Prix de West Purchase Award from the National Cowboy & Western Heritage Museum and the Trustees’ Purchase Award at the Masters of the American West show at the Autry National Center. He has also received more than half a dozen Patrons’ Choice Awards from these and other shows, such as The American Masters Fine Art Show & Sale at The Salmagundi Club in New York City.

Walters’ work can be viewed in museums across America, including the Forbes Magazine Galleries, the National Cowboy Museum, The Eiteljorg Museum, The Autry National Center, Gilcrease Museum of the Americas, The Pearce Art Museum, Leanin’ Tree Museum and at the Grand Canyon National Park collection.

His work can be purchased at Trailside Galleries of Scottsdale, Arizona and Jackson, Wyoming, the Claggett/Rey Gallery of Vail, Colorado, the Nedra Metteucci Galleries of Santa Fe, New Mexico.

For more information about the upcoming Quest for the West show, please visit: http://www.eiteljorg.org/explore/exhibitions/quest-for-the-west

Press Releases, Quest for the West
error: Content is protected !!
©2020 | Designed and Developed by The Myss Miranda Agency