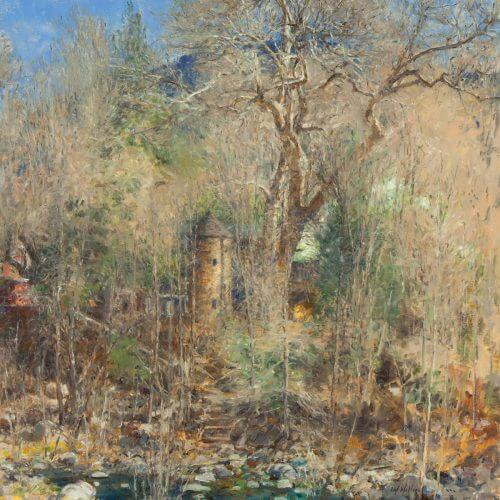 The European style tower is misleading and mysterious to the setting of Oak Creek Canyon just north of Sedona, AZ. I set up my easel  close to Indian Gardens and this painting was completed entirely  on location in April 2017. I was attracted to the sycamore trees that dominate the upper portion of the panting because of their twisted delicacy and the light on the white bark against the cobalt blue sky and blue mountain.  Early spring blossoms hidden in the branches signal the start to spring in the canyon, one of my favorite times of year. Despite the simplicity of the scene, it takes a seasoned eye to capture and render a subject like this.

This painting was shown during the 2017 Quest for the West Show and Sale at Eiteljorg Museum in Indianapolis, IN.