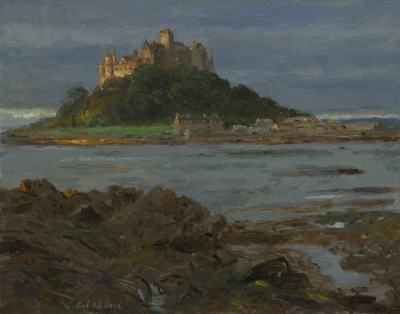 Oil on Canvas Board

Curt Walters is best known for his renditions of Grand Canyon, but is equally at ease painting in the time honored tradition of plein aire, anywhere or anything. While on his many travel adventures with Tom Dailey , Curt always has his paint set at hand.

Curt and Tom visited south west England in 2013. This painting of St Michael’s Mount was painted on location by Curt. The Mount is a small tidal island in Mount’s Bay, Cornwall. 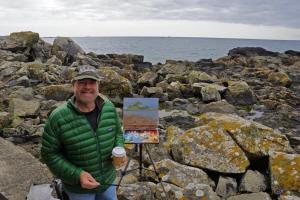 The island is linked to the town of Marazion by a man-made stone causeway passable at low-tide. The castle and chapel of the Mount have been the home of the St Aubyn family since approximately 1650. The earliest buildings, on the summit, date to the 12th century, and the harbour dates from the 15th century. The 1800’s village gives the island its current form.
Curt painted this view looking across the bay from Marazion. Started on a very gray coastal day, the sun broke the last few minutes of the day, which Curt captured on canvas. Curt also says that he is ready to go back to Marizion for the scones and clotted cream.