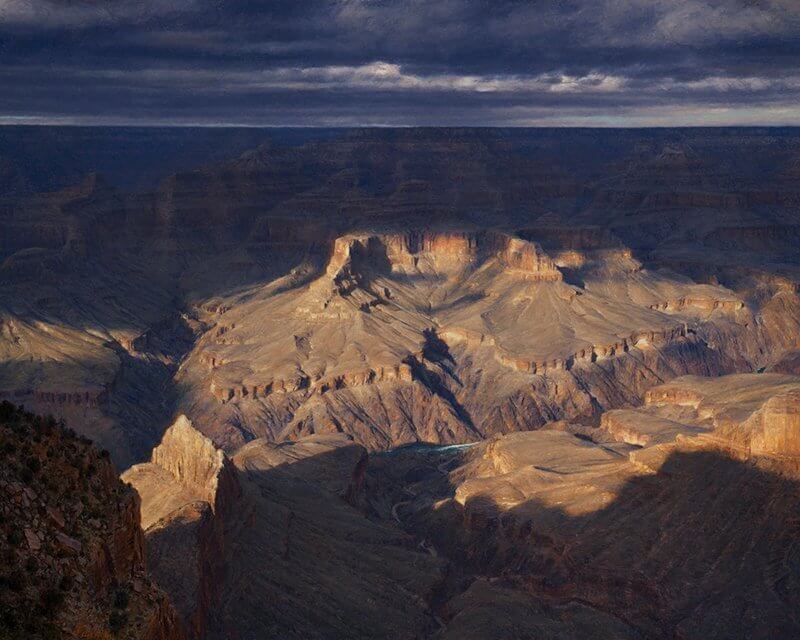 The inspiration for this painting was conceived in 1986, on a painting trip to Grand Canyon with my artist friends, Earl Carpenter, Matt Smith, M.L. Coleman, and Joe Abbrescia. We naively tried to paint during a March windstorm near Mohave Point. While attempting to paint at my easel on the windy rim, watching the movement of sun and shadows, it wasn’t long before a gust of wind took the unfinished canvas, and sent it airborne into the abyss. My better judgment prevailed that day, and I did not attempt to rescue the canvas as it coasted away from me. Twenty-five years later, upon the creation of a painting for the new West Select Invitational show at the Phoenix Art Museum, I found myself once again in the same location near Mohave Point working on a small study. I couldn’t help but reminisce about that previous experience, and when I returned home I re-visited my photographs from 1986. The inspiration for Sun: Shadow: Wind came from those photographs and the study I had been working on that day, in 2011.

This work was featured in the West Select, A New Western Classic show and Sale at Steele Gallery from October 23,- November 20, 2011 and won Best Oil Painting and Best of Show

This work is now in the permanent collection of Western Desert Caballeros Museum.