Walters Returns to Eiteljorg in September, 2011

2011 Quest for the West at Eiteljorg Museum 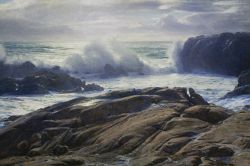 Walters is preparing for his next show, Quest for the West, hosted by the Eiteljorg Museum in Indiana.

This annual show and sale is now in it’s 6th year.

The Quest show brings together 50 of America’s most talented and outstanding artists. The works feature landscapes, wildlife, historical narratives, portraits and still life compositions showcasing and honoring the culture and the history known only to the American West.

The opening night gala will be on September 10th and the exhibit opens to the public the following day.

This year Walters will show “Breaking Surf: Point Lobos,” a 24″ x 36″ seascape of the California Coast. Point Lobos is on the Monterey Peninsula and is considered a crown jewel in the California state park system.

Last year, the Eiteljorg presented Curt with Henry Farny Award for Best Painting on the piece title “The Arborists’ Reward.”

To learn more about the show and sale, please visit the Eiteljorg Website.

If you will be attending, RSVP on Curt’s Facebook page and let him know you’ll be there.

Press Releases, Quest for the West
error: Content is protected !!
©2020 | Designed and Developed by The Myss Miranda Agency