Walters Returns to the Prix de West for 2008 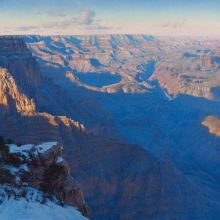 Internationally acclaimed artist Curt Walters, of Sedona, Arizona, will again be in attendance at the upcoming Prix de West Invitational’s opening weekend exhibition and sale in Oklahoma City on June 13 – 14.  The event, which runs through September 7, 2008, features over 300 paintings and sculptures by contemporary Western artists, as well as special seminars and receptions, and concludes with the awards banquet and a fixed sale.

Recently, Walters has proved to be one of the most popular artists in attendance at the National Cowboy & Western Heritage Museum’s annual show, collecting a staggering six medals over a decade, including three Nona Jean Hulsey Buyers’ Choice Awards, a back-to-back win of the Frederic Remington Painting Award in 2004 and 2005, and last year’s Prix de West Purchase Award.  The 2007 winning painting, “Spring’s Caprice,” now hangs in the museum’s permanent collection.
Also, the artist has won the Trustees’ Purchase Award and the David P. Usher Patrons’ Choice Award from the Masters of the American West Show at the Autry Museum in L.A., as well as three medals from Eiteljorg Museum’s annual Quest for the West Show and a Patrons’ Choice Award at the Artists of America show in Denver.  Walters was recently a part of the American Masters Show at the exclusive Salmagundi Club in New York City.  In 1997, Art of the West was the first of many art publications to proclaim Curt Walters as the “Greatest Living Grand Canyon Artist.”  In their 2007 Twentieth Anniversary Edition, Art of the West included him among “Eight True Masters.” 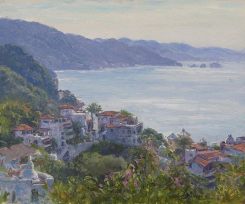 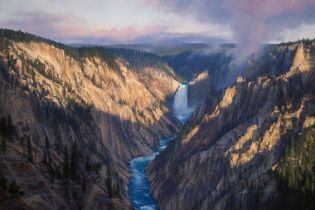 Walters will be showcasing four paintings this year, which will include two of his signature Grand Canyon pieces.  The first is “Obliqued Shadows of Turquoise,” 36” x 36”, which captures a beautiful sunset during the winter solstice off of the South Rim of Grand Canyon.  The second is a 10” x 8” field study, titled, “January Overcast.”  “Sunup On the Yellowstone” is a massive 48” x 72” oil on canvas sunrise on Yellowstone Falls/Canyon.  The final piece, “Bay of Vallarta,” is a small but airy look at the Mexican Bay.

Besides art, Curt Walters is also well known for his passionate involvement with conservationism, especially in and around his home state, and particularly with the Grand Canyon.  His work can be found at the Trailside Galleries of Scottsdale, Arizona and Jackson, Wyoming, and at the Claggett/Rey Gallery in Vail, Colorado. 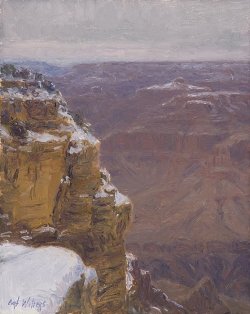